US: Big drop in migrant kids at largest emergency shelter

SAN DIEGO (AP) — The Biden administration says the number of unaccompanied migrant children housed at its largest emergency shelter has dropped by more than 40% since mid-June.

Health and Human Services Secretary Xavier Becerra told reporters Monday that 790 boys are now being housed at Fort Bliss Army base in El Paso, Texas, and all the girls have left. 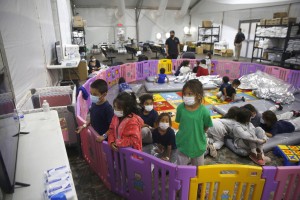 FILE – In this March 30, 2021 file photo Young unaccompanied migrants, from ages 3 to 9, watch television inside a playpen at the U.S. Customs and Border Protection facility, the main detention center for unaccompanied children in the Rio Grande Valley, in Donna, Texas. The Biden administration says the number of unaccompanied migrant children housed at its largest emergency shelter has dropped by more than 40% since mid-June. (AP Photo/Dario Lopez-Mills, Pool, File)

The drop in numbers comes after weeks of criticism by child welfare advocates who voiced concerns about inadequate conditions at the large-scale facility.

A rise in the number of migrant children crossing the southwest border alone has challenged the Biden administration. The Department of Health and Human Services has more than 14,200 migrant children in its care, down from 22,000 two months ago.

Becerra said more services and staffing have been added, including case managers who connect children with family in the U.S.

“We have continued to expand our capacity, and as a result, we’re able to discharge more of these children into the hands of a responsible, vetted custodian, which then frees up a bed for another child,” he said.

Despite the improvements, Becerra said the shelters are not a solution and urged Congress to fix what he called a broken immigration system.