US forces: Rockets hit airbase in Iraq hosting US troops

BAGHDAD (AP) — The U.S.-led coalition in Iraq says at least 10 rockets have targeted a military base in western Iraq that hosts American troops.

The rockets struck Ain al-Asad airbase in Anbar province at 7:20 a.m. on Wednesday. 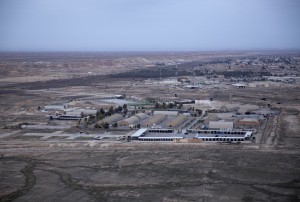 FILE – This Dec. 29, 2019, aerial file photo taken from a helicopter shows Ain al-Asad air base in the western Anbar desert, Iraq. At least 10 rockets targeted a military base in western Iraq that hosts U.S.-led coalition troops on Wednesday, March 3, 2021, the coalition and the Iraqi military said. It was not immediately known if there were any casualties. (AP Photo/Nasser Nasser, File)

That’s according to coalition spokesman Col. Wayne Marotto. It was not immediately known if there were any casualties. It was the first attack since the U.S. hit Iran-aligned militia targets in Syria, along the border with Iraq, last week.

It also comes two days before Pope Francis is scheduled to visit Iraq in a much anticipated trip that will include stops in Baghdad, southern Iraq and the northern city of Irbil.

Poll: 15% of Americans worse off a year into pandemic

Dr. Mona Hacker on the temporary pause of use in J&J COVID-19 vaccine

Restaurants can now have a capacity of 50% for indoor dining, or 200 people