Our deepest sympathies and love go out to the families of the brave American heroes who were killed today in Syria. We also pray for the soldiers who were wounded in the attack. Our service members and their families have all sacrificed so much for our country.

BEIRUT (AP) — A number of U.S. troops were killed in an explosion while conducting a routine patrol in Syria on Wednesday, the U.S. military said, an attack that came less than a month after U.S. President Donald Trump announced his intention to withdraw troops from the war torn country.

The Islamic State group claimed responsibility for the morning attack, which local groups said killed 16 people in the U.S.-patrolled town of Manbij.

The claim calls into question Trump’s claim that IS has been defeated in Syria — his stated reason for pulling 2,000 American troops out of the country.

“We have defeated ISIS in Syria, my only reason for being there during the Trump Presidency,” Trump tweeted in December in announcing his intention to bring back U.S. troops “NOW.”

Vice President Mike Pence repeated the claim Wednesday, saying the Islamic State “caliphate has crumbled” and the militant network “has been defeated.” His comments in a speech at the State Department came shortly after the U.S. military announced that American soldiers were among those killed in Manbij. 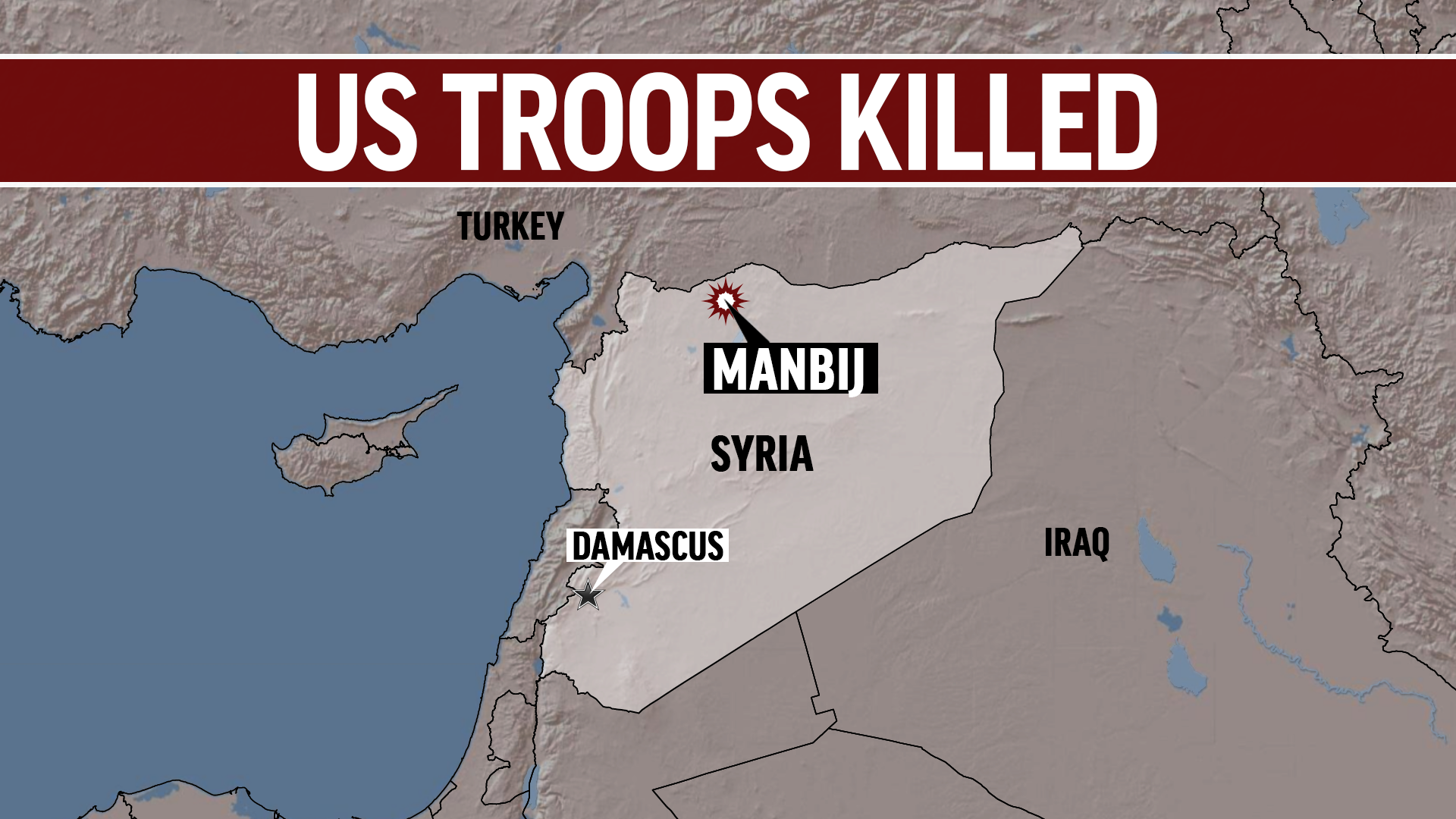 Video released by local activists and news agencies showed a restaurant that suffered extensive damage and a street covered with debris and blood. Several cars were also damaged. Another video showed a helicopter flying over the area.

A security camera showed a busy street, and then a ball of fire engulfing people and others running for cover as the blast went off.

Trump’s shifting timetable for pulling U.S. troops out of Syria, a country he described as “sand and death,” has left allies and other players in the region confused and jockeying for influence over a withdrawal strategy that appeared to be a work in progress.

Critics have said a pullout was premature, that IS was still not defeated and a withdrawal could lead to a power vacuum that would fuel even more violence. It also led to the resignation of Secretary of Defense Jim Mattis.

Since then, U.S. officials and Trump himself have suggested the withdrawal would be slower than initially believed. White House national security adviser John Bolton said two conditions would have to be met, including the protection of America’s local Kurdish allies in northern Syria, and the total defeat of IS.

Last week, the U.S. military began pulling out equipment from the northeast into neighboring Iraq. No troops are known to have withdrawn yet.

Manbij is highly strategic: It is the main town on the westernmost edge of Syrian territory held by the U.S.-backed Syrian Kurds, running along the border with Turkey. Mixed Kurdish-Arab Syrian forces liberated Manbij from the rule of the Islamic State group in 2016 with help from the U.S.-led coalition. But Kurdish control of the town infuriated Turkey, which views the main U.S. Kurdish ally, the YPG militia, as “terrorists” linked to Kurdish insurgents on its own soil.

The town has been at the center of tensions in northern Syria, with the militaries of two NATO members, the U.S. and Turkey, on opposing sides.

The two sides began joint patrols around Manbij in November as part of an agreement for easing tensions between the two allies.

The crowded terrain has become more combustible as Turkey threatens to attack Kurdish-run towns further east. The presence of the Americans is a main obstacle preventing them from doing so.

The Britain-based Syrian Observatory for Human Rights said 16 people were killed including nine civilians and others were wounded in Wednesday’s blast. It added that at least five U.S.-backed Syrian fighters were also among the dead.

The U.S. military released a statement on Twitter that said: “U.S. service members were killed during an explosion while conducting a routine patrol in Syria today. We are still gathering information and will share additional details at a later time.”

The Kurdish Hawar news agency, based in northern Syria, and the Observatory, which monitors the war through activists on the ground, reported U.S. troops were among the casualties.

Turkey’s state-run Anadolu Agency, citing unnamed local sources, said a number of U.S. soldiers were injured in the blast and that the U.S. military evacuated soldiers by helicopter.

Attacks targeting members of the U.S.-led coalition in Syria have been rare.

In March last year, a roadside bomb killed two coalition personnel, an American and a Briton, and wounded five in Manbij.