US Navy veteran has been imprisoned in Iran for months

IRAN (KUSI) – A US Navy veteran has been held in an Iranian prison since July after he flew there to visit his Iranian girlfriend, his mother told CNN on Tuesday.

The imprisonment of Michael R. White, 46, of Imperial Beach, California, was reported by The New York Times earlier this week.

His mother, Joanne White, declined to discuss why her son was being held. She said she filed a missing-person report after her son failed to 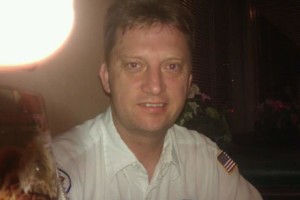 return to work in California as planned in late July.

State Department officials told her three weeks ago that he was in an Iranian prison, she told The Times. She said she is worried about his health, because he has had cancer and suffers from asthma. “My heart aches for him. … I just want to see him home safe and sound,” Joanne White said by phone.
News about Michael White’s detention comes amid rising tensions between the United States and Iran. Those strains have particularly increased since May, when the United States withdrew from a nuclear deal with the Islamic republic and reinstated sanctions against it.
CNN has sought comment from the governments of Iran and Switzerland, which represents the United States’ diplomatic interests in Iran.
A US State Department representative said the department was “aware of reports of the detention of a US citizen in Iran,” and that the department has “no higher priority than the safety and security of US citizens abroad.”
“Due to privacy considerations, we have no additional information to provide at this time,” the representative said.
Michael White flew from Los Angeles to Dubai on July 9, and then on to Iran, his mother said.
He was visiting a woman whom he said was his girlfriend, she said. He met her online about four or five years ago, and he had visited her four times over the last few years, Joanne White said.
Michael White’s wife, Lupe White, said she last saw her husband July 9 and he texted her a day later saying he was on a business trip for two weeks. Lupe White said he has had an online relationship with a woman in Iran for six years and would go see her for two weeks at a time.
She and her husband, who have been married for almost 15 years, have discussed divorce, she said, but she was hoping they had strengthened their relationship in the past six months as she helped him through his chemotherapy.
“I still love him. He is my partner. He is still my husband,” she said.
She said she had not been contacted by the US State Department and was unaware he was in prison until being contacted by CNN.
White said she talked to police at her home after she called them when he did not return home.
Categories: National & International News