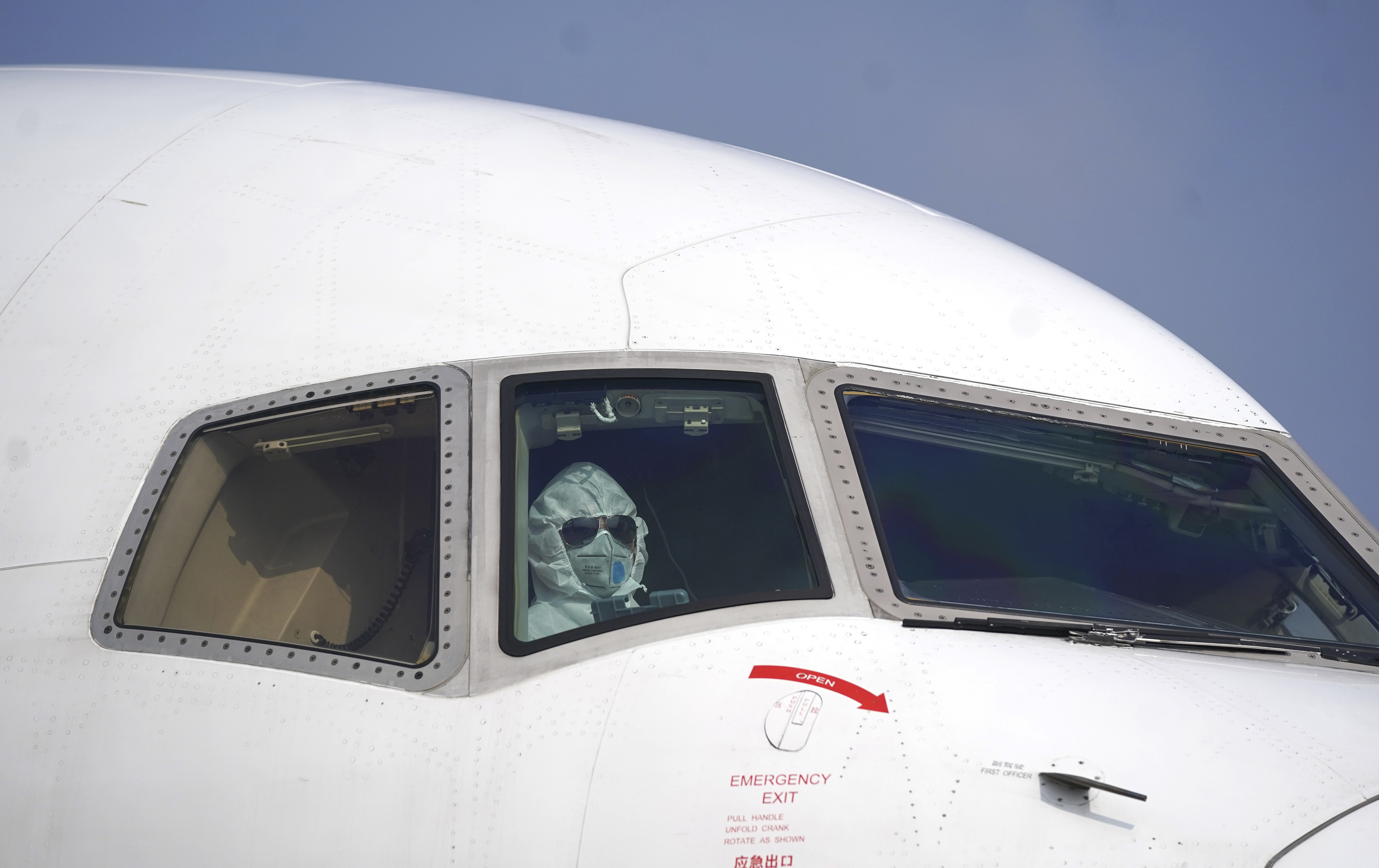 In this photo released by China’s Xinhua News Agency, a pilot wearing a protective suit parks a cargo plane at Wuhan Tianhe International Airport in Wuhan in central China’s Hubei Province, Tuesday, Jan. 28, 2020. Hong Kong’s leader announced Tuesday that all rail links to mainland China will be cut starting Friday as fears grow about the spread of a new virus. (Cheng Min/Xinhua via AP)

BEIJING (AP) — The United States and several other nations prepared Tuesday to airlift citizens out of a Chinese city at the center of a virus outbreak that has killed more than 100 people.

Hong Kong’s leader said it will cut all rail links to mainland China and halve the number of flights as authorities in China and overseas sought to stem the spread of the new virus. The number of confirmed cases rose to more than 4,500.

The U.S. government chartered a plane to fly out diplomats from the U.S. Consulate in Wuhan, where the outbreak started, and other Americans. The plane will make a refueling stop in Alaska before flying on to Ontario, California, the U.S. Embassy said.

A Japanese-chartered Boeing 767 departed for Wuhan to fly out its citizens, the first of two possible flights, and South Korea also said it will send a plane to the city in central China. France, Mongolia and other governments also planned evacuations.

China has cut off access to Wuhan and 16 other cities in Hubei province to prevent people from leaving and spreading the virus further. The lockdown has trapped more than 50 million people in the most far-reaching disease control measures ever imposed.

The Japanese flight was bringing 20,000 face masks as well as protective gear, all in short supply as hospitals grapple with a growing number of patients. The city is building two hospitals in a matter of days to add more than 2,000 beds.

U.S. health officials expanded their recommendation for people to avoid non-essential travel to any part of China, rather than just Wuhan and other areas most affected by the outbreak.

Asian stock markets tumbled for a second day, dragged down by worries about the virus’s global economic impact.

Hong Kong leader Carrie Lam, wearing a green surgical mask, told a news conference that train service would stop at midnight Thursday and that the two stations connecting to the mainland would be closed.

She stopped short of a total closing of the border, as North Korea and Mongolia have done, but said ferry and bus service to the mainland would also be suspended.

China’s death toll from the new viral disease rose to 106, including the first death in Beijing, the Chinese capital, and 24 others in Hubei province, where the first illnesses were detected in December.

There were 1,771 new cases confirmed in China, raising the national total to 4,515, according to the National Health Commission. It said 976 people were in serious condition.

The sharp rise in infections in recent days suggests there has been significant human-to-human spread of the virus, though it could also be explained by expanded monitoring efforts, said Malik Peiris, chair in virology at the University of Hong Kong.

Experts worry that the new virus may spread more easily than originally thought, or may have mutated into a form that does so. It is from the coronavirus family, which also can cause the common cold as well as more serious illnesses such as SARS.

Peiris, an adviser on the World Health Organization’s coronavirus emergency committee, said it is reassuring that outside of China the disease has not spread widely beyond the people who brought it from Wuhan.

China has reported eight cases in Hong Kong and five in Macao, and more than 45 cases have been confirmed elsewhere in the world. Almost all involve mainland Chinese tourists or people who visited Wuhan.

The five American cases — two in southern California and one each in Washington state, Chicago and Arizona — are people who had recently arrived from central China.

The Chinese government has sent 6,000 extra medical workers to Wuhan from across China, including 1,800 who were due to arrive Tuesday, a commission official, Jiao Yahui, said at a news conference.

A baby boy was delivered by surgery in Wuhan after his 27-year-old mother was hospitalized as a “highly suspected” virus case, state TV reported. The mother, who has a fever and cough, was 37 weeks pregnant, or two weeks less than a standard full term.

Doctors wore protective masks and clothing for the delivery Friday at Union Hospital.

“It was unlikely for her to be able to give natural birth,” said the hospital’s deputy director of obstetrics, Zhao Yin. “After the baby was born, the mother would suffer less pressure in her lungs and she could get better treatment.”

In Beijing, residents of two villages in the capital’s eastern Pinggu district were refusing to allow outsiders to enter in an effort to avoid the virus.

“The village has been locked down,” a member of the Beitumen village committee who would give only his surname, Guo, said by telephone. He said villagers are allowed to go out to buy daily necessities.

Another village, Jingyu, imposed similar restrictions, said a member of the local committee who wouldn’t give his name.

The Education Ministry canceled English proficiency and other tests for students to apply to foreign universities. The ministry said the new semester for public schools and universities following the Lunar New Year was postponed until further notice.

Hong Kong announced postal services and most government offices would stay closed through at least next week. The education department said schools would reopen on Feb. 17.

Chinese financial markets were closed for the holiday, but stock indexes in Tokyo, Seoul and Sydney all declined.

Beijing’s official response has “vastly improved” since the 2002-03 SARS outbreak, which also originated in China, but “fears of a global contagion are not put to bed,” said Vishnu Varathan at Mizuho Bank in Singapore.

Airlines, resorts and other companies that rely on travel and tourism suffered steep losses. Prices of gold and bonds rose as traders moved money into safe haven holdings.

The Shanghai Stock Exchange, one of the world’s busiest, announced it was postponing the resumption of trading after the holiday by three days to Monday.

The new virus causes cold- and flu-like symptoms, including cough and fever, and in more severe cases, shortness of breath and pneumonia.

The virus is thought to have spread to people from wild animals sold at a Wuhan market. China on Sunday banned trade in wild animals and urged people to stop eating meat from them.