(AP) – The COVID-19 death toll in the U.S. topped 500,000 Monday, all but matching the number of Americans killed in World War II, Korea and Vietnam combined.

The lives lost, as recorded by Johns Hopkins University, are about equal to the population of Kansas City, Missouri, and greater than that of Miami; Raleigh, North Carolina; or Omaha, Nebraska.

And despite the rollout of vaccines since mid-December, a closely watched model from the University of Washington projects more than 589,000 dead by June 1.

The U.S. toll is by far the highest reported in the world, accounting for 20 percent of the nearly 2.5 million coronavirus deaths globally, though the true numbers are thought to be significantly greater, in part because of the many cases that were overlooked, especially early in the outbreak.

President Joe Biden will mark the U.S. crossing 500,000 lives lost from COVID-19 with a moment of silence and candle lighting ceremony at the White House.

Biden will deliver remarks at sunset to honor the dead, the White House said. He’s expected to be joined by first lady Jill Biden and Vice President Kamala Harris and her husband, Doug Emhoff. 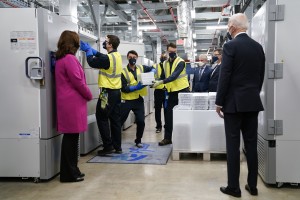 Joyce Willis of Las Vegas is among the countless Americans who lost family members during the pandemic. Her husband, Anthony Willis, died Dec. 28, followed by her mother-in-law in early January.

There were anxious calls from the ICU when her husband was hospitalized. She was unable to see him before he died because she, too, had the virus and could not visit.

“They are gone. Your loved one is gone, but you are still alive,” Willis said. “It’s like you still have to get up every morning. You have to take care of your kids and make a living. There is no way around it. You just have to move on.”

Then came a nightmare scenario of caring for her father-in-law while dealing with grief, arranging funerals, paying bills, helping her children navigate online school and figuring out how to go back to work as an occupational therapist.

Her father-in-law, a Vietnam vet, also contracted the virus. He also suffered from respiratory issues and died on Feb. 8. The family isn’t sure if COVID-19 contributed to his death.

“Some days I feel OK and other days I feel like I’m strong and I can do this,” she said. “And then other days it just hits me. My whole world is turned upside-down.”

The global death toll was approaching 2.5 million, according to Johns Hopkins.

Average daily deaths and cases have plummeted in the past few weeks. Virus deaths have fallen from more than 4,000 reported on some days in January to an average of fewer than 1,900 per day. But experts warn that dangerous variants could cause the trend to reverse itself.

Some experts say not enough Americans have been inoculated yet for the vaccine to be making much of a difference.

Instead, the drop-off in deaths and cases has been attributed to the passing of the holidays; the cold and bleak days of midwinter, when many people are inclined to stay home; and better adherence to mask rules and social distancing.