US troops surge evacuations out of Kabul but threats persist 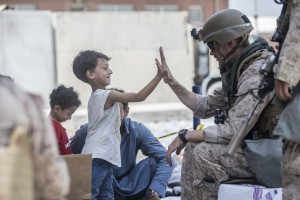 In this Aug. 22, 2021, image provided by the U.S. Marine Corps, A Marine with Special Purpose Marine Air-Ground Task Force-Crisis Response-Central Command gives a high five to a child during an evacuation at Hamid Karzai International Airport in Kabul, Afghanistan. Sgt. Samuel Ruiz/U.S. Marine Corps via AP)

WASHINGTON (AP) — U.S military troops flying round the clock have managed their biggest day of airlifts out of Afghanistan by far.

But deadly violence that has blocked many desperate Afghans and foreigners from entering Kabul’s airport persisted Monday.

And the Taliban signaled they may insist on the airlifts ending at the end of the month.

The White House says 28 U.S. military flights carried about 10,400 people to safety over the 24 hours that ended early Monday morning.

For the first time the numbers have met — and exceeded — U.S. projections.