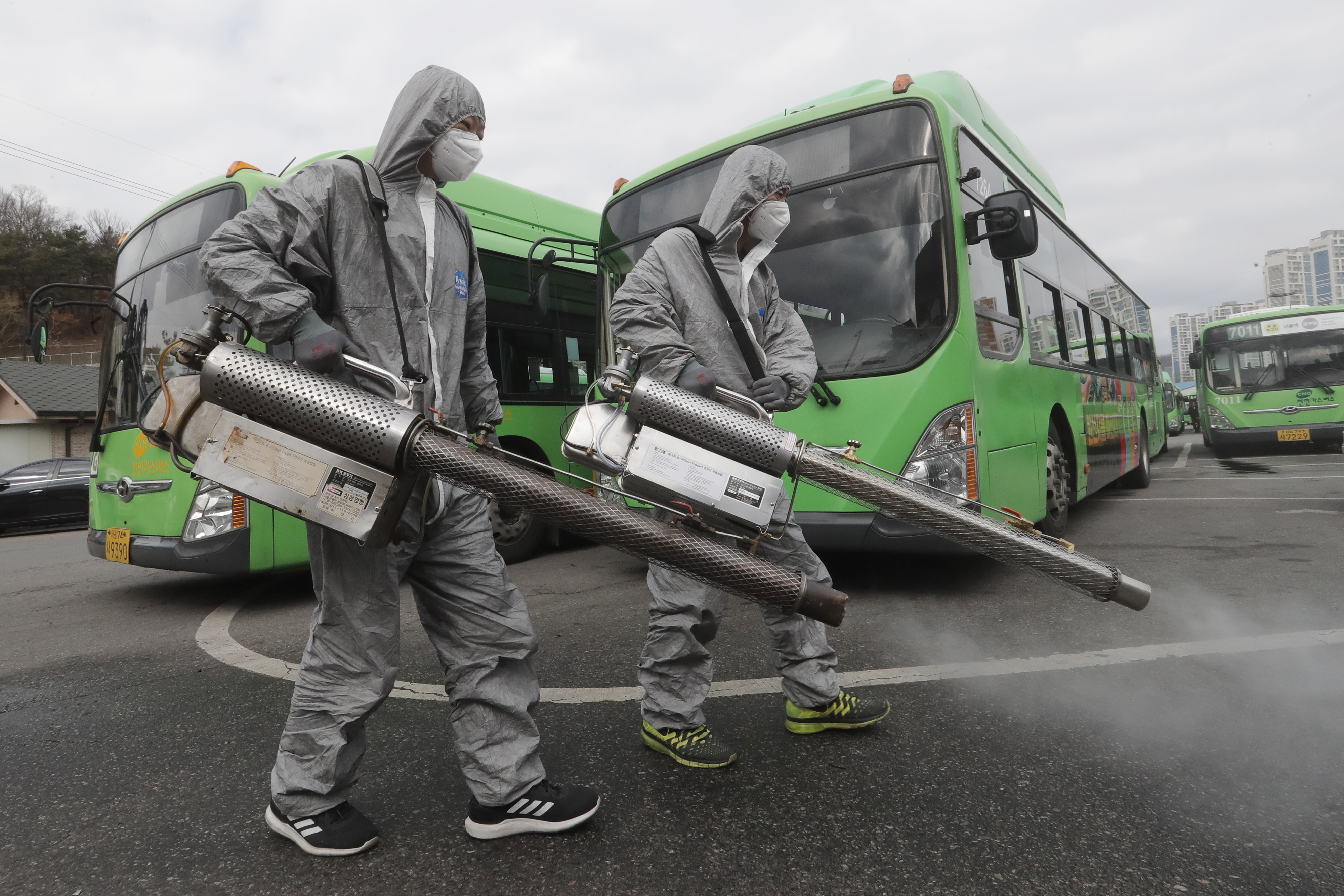 Workers wearing protective suits spray disinfectant as a precaution against the coronavirus at a bus garage in Seoul, South Korea, Wednesday, Feb. 26, 2020. The number of new virus infections in South Korea jumped again Wednesday and the U.S. military reported its first case among its soldiers based in the Asian country, with his case and many others connected to a southeastern city with an illness cluster. (AP Photo/Ahn Young-joon)

With the illness pushing its way into a sixth continent and the number of sick and dead rising, the crisis gave way to political and diplomatic rows, concern that bordered on panic in some quarters, and a sense that no part of the world was immune to the disease’s spread.

“Viruses don’t know borders and they don’t stop at them,” said Roberto Speranza, the health minister in Italy, where northern towns were on army-guarded lockdowns and supermarket shelves were bare.

As growing parts of Europe and the Middle East saw infections and a first case was found in South America, air routes were halted and border control toughened. But for an illness transmitted so easily, with its tentacles reaching into so many parts of the world, leaders puzzled over how to keep the virus from proliferating seemed willing to try anything to keep their people — and economies — safe.

Japanese Prime Minister Shinzo Abe called for schools across the country to close until late March, a decision that impacted 12.8 million students.

“The most important thing is to prevent infections,” said Norinobu Sawada, vice principal of Koizumi primary school, “so there aren’t many other options.”

In South Korea, the hardest-hit country outside China, four Busan markets known for colorful silks and a dizzying array of other wares were shuttered while the country’s military sent hundreds of its doctors and soldiers to aid in treatment and quarantines.

In Iran, the front line of Mideast infections, officials loosened rules barring the import of many foreign-made items to allow in sanitizers, face masks and other necessities, and removed overhead handles on Tehran’s subways to eliminate another source of germs. Peru put specialists on round-the-clock shifts at its biggest airport, Argentina took the temperature of some new arrivals and El Salvador added bans for travelers from Italy and South Korea.

The holy city of Mecca, which able-bodied Muslims are called to visit at least once in their lives, and the Prophet Muhammad’s mosque in Medina were cut off to potentially millions of pilgrims, with Saudi Arabia making the extraordinary decision to stop the spread of the virus.

With the monarchy offering no firm date for the lifting of the restrictions, it posed the possibility of affecting those planning to make their hajj, a ritual beginning at the end of July this year.

“We ask God Almighty to spare all humanity from all harm,” the country said in announcing the decision.

Disease has been a constant concern surrounding the hajj, with cholera outbreaks in the 19th century killing tens of thousands making the trip. More recently, another coronavirus that caused Middle East respiratory syndrome, or MERS, prompted increased public health measures, but no outbreak resulted.

COVID-19’s westward creep — including a case in California in the United States that does not appear linked to overseas travel — had some countries warning their people to obey measures intended to keep a single case from blossoming into a cluster that could paralyze a community.

A man originally from Wuhan, the Chinese city at the center of the global outbreak, who contracted the virus was charged alongside his wife in Singapore for allegedly lying about their whereabouts as officials tried to stem further infections. In Colombia, which has yet to report any cases, officials reminded residents they could be jailed for up to eight years if they violate containment measures. And in South Korea, the National Assembly passed a law strengthening the punishment for those violating self-isolation, more than tripling the fine and adding the possibility of a year in prison.

“It came later than it should have,” said Lee Hae-shik, spokesman for the ruling Democratic Party, calling for further non-partisan cooperation to address the outbreak.

Countries’ efforts to contain the virus opened up diplomatic scuffles. South Korea fought prohibitions keeping its citizens out of 40 countries, calling them excessive and unnecessary. China warned Russia to stop discriminatory measures against its people, including monitoring on public transit. Iran used the crisis to rail against the U.S., which it accused of “a conspiracy” that was sowing fear.

The global count of those sickened by the virus hovered around 82,000, with 433 new cases reported Thursday in China and another 505 in South Korea, where the military called off joint drills planned with American troops. Iran’s caseload surged by more than 100 cases.

Even the furthest reaches of the globe were touched by the epidemic, with a woman testing positive in Tromsoe, the fjord-dotted Norwegian city with panoramas of snow-capped mountains. Health officials said the woman had traveled to China.