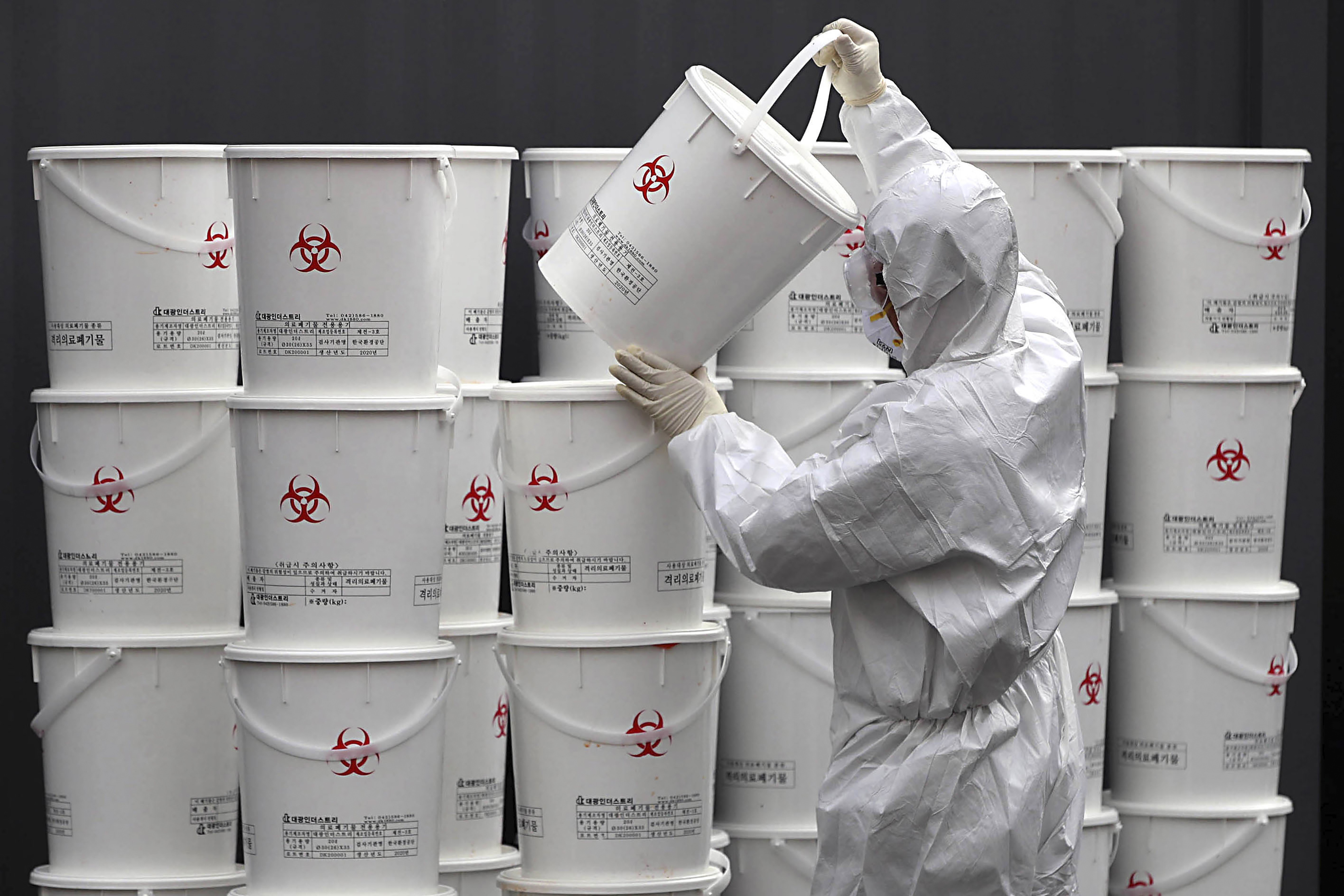 A worker in protective gear stacks plastic buckets containing medical waste from coronavirus patients at a medical center in Daegu, South Korea, Monday, Feb. 24, 2020. South Korea reported another large jump in new virus cases Monday a day after the the president called for “unprecedented, powerful” steps to combat the outbreak that is increasingly confounding attempts to stop the spread. (Lee Moo-ryul/Newsis via AP)

SEOUL, South Korea (AP) — The new virus took aim at a broadening swath of the globe Monday, with officials in Europe and the Middle East scrambling to limit the spread of an outbreak that showed signs of stabilizing at its Chinese epicenter but posed new threats far beyond.

In Italy, authorities set up roadblocks, called off soccer matches and shuttered sites including the famed La Scala opera house. In Iran, a report of dozens of deaths in a single city emerged as infections were reported to have spread for the first time to Iraq, Kuwait, Bahrain and Afghanistan. Across the world, stock markets and futures dipped.

The number of people sickened by the coronavirus topped 79,000 globally, and wherever it sprung up, officials rushed to try to contain it.

“The past few weeks has demonstrated just how quickly a new virus can spread around the world and cause widespread fear and disruption,” said the head of the World Health Organization, Tedros Adhanom Ghebreyesus.

Clusters of the virus continued to emerge, including a possible one in Qom, an Iranian city where the country’s semiofficial ILNA news agency cited a lawmaker in reporting a staggering 50 people had died of COVID-19, the disease caused by the virus. The country’s Health Ministry rejected that, insisting the death toll remained at 12.

Authorities in Iran closed schools across much of the country for a second day. Movie theaters and other venues were shuttered through at least Friday. And daily sanitizing of the metro in Tehran, which is used by some 3 million people, was begun.

Recognition grew that the virus was no longer stemming only from contact with infected people in China.

“Many different countries around the world may be sources of COVID-19 infections,” said Mark Woolhouse, a professor of infectious disease epidemiology at the University of Edinburgh. “This makes it much harder for any one country to detect and contain.”

China still has the vast majority of cases, but as it records lower levels of new infections, attention has shifted to new fronts in the outbreak. Chief among them is South Korea, where President Moon Jae-in placed the country under a red alert, the highest level, allowing for “unprecedented, powerful steps” to stem the crisis.

Beyond expanding a delay to the start of the school year from the hardest-hit area of Daegu nationwide, though, it remains to be seen how far the government will go. A Chinese-style lockdown of Daegu — a city of 2.5 million people that is the country’s fourth largest — appeared unlikely, even as signs of the response to a broadening problem could be seen nearly everywhere in the nation.

More than 600 police officers in Daegu fanned out in search of hundreds of members of a church that has been identified as a source for hundreds of infections. The country’s National Assembly was temporarily closed Monday as workers sterilized its halls. At shops and food stalls in the capital of Seoul, a misty fog surrounded crews in protective suits who sprayed disinfectants.

“The changes have been dramatic,” said Daegu resident Nah Young-jo, who described an increasingly empty city of few passersby and closed restaurants.

South Korean officials recommended that courts consider postponing trials of cases not deemed urgent, while Mayor Park Won-soon of Seoul threatened tough penalties for those who defy a ban on rallies in major downtown areas. Work schedules for city employees in Seoul were staggered to reduce crowding on subways, where packed cars could become petri dishes if an infected passenger were aboard.

“If we fail to effectively prevent the spread of the virus into the local communities, there would be a large possibility (that the illness) spreads nationwide,” warned Kim Gang-lip, South Korea’s vice health minister.

Health workers said they planned to test every citizen in Daegu who showed cold-like symptoms for the coronavirus, estimating around 28,000 people would be targeted.

In Italy, where 219 people have tested positive for the virus and five have died, police manned checkpoints around a dozen quarantined northern towns as worries grew across the continent.

Austria temporarily halted rail traffic across its border with Italy. Slovenia and Croatia, popular getaways for Italians, were holding crisis meetings on the outbreak. Schools were closed, theater performances were canceled and even Carnival celebrations in Venice were called off.

It was a sign of how quickly circumstances could change in the widening COVID-19 scare. Italy had imposed more stringent measures than other European countries after the outbreak began, barring flights beginning Jan. 31 to and from China, Taiwan, Hong Kong and Macau.

“These rapid developments over the weekend have shown how quickly this situation can change,” the health commissioner for the European Union, Stella Kyriakides, said in Brussels. “We need to take this situation of course very seriously, but we must not give in to panic, and, even more importantly, to disinformation.”

Dr. Liang Wannian, the leader of a team of Chinese experts working with WHO to study the outbreak, said more than 3,000 medical workers had been infected in the country, the majority of them in Wuhan. Liang said while the origins of the virus were still being studied, research suggested that bats may have been one of the hosts and that pangolins, a type of anteater, may have been an intermediate host.

Meantime, China announced it would postpone the annual meetings of the National People’s Congress, among the most important political gatherings of the year, citing the virus outbreak.

Suspect who was fatally shot by police in Talmadge Area identified

Suspect who was fatally shot by police in Talmadge Area identified