SAN DIEGO (KUSI) – San Diego County is one day away from knowing if some businesses will be able to remain open, or be forced to close in accordance with Governor Newsom’s reopening guidelines.

San Diego County is preparing for the announcement that our case numbers are too high, and will be forced to move back to the Purple Tier, which is the most restrictive tier.

Over the last week, KUSI has spoken with multiple business owners who have publicly announced that they will defy the potential orders to close and remain open. All the business owners said they simply wouldn’t be able to survive another shutdown.

But those cries for help didn’t seem to resonate with San Diego County Supervisor Nathan Fletcher.

Earlier in the day Monday, Supervisor Nathan Fletcher held a press conference where he shamed San Diegans and Supervisors Kristin Gaspar and Jim Desmond for their efforts to help businesses open quicker than Governor Newsom would allow.

Fletcher went as far to say that an expedited reopening process would cause death rates to increase significantly.

A few hours after Fletcher’s press conference condemning anyone who supports an expedited reopening process, a “We Mean Business” rally was held outside the San Diego County Administration Building. The event was organized by Angie Weber, the owner of Cowboy Star restaurant in the Gaslamp District.

Weber has publicly announced that she will keep her restaurant open if San Diego is in fact forced to move back into the Purple Tier.

Hundreds of San Diegans and many local officials showed up to voice their concerns over Governor Newsom’s shutdown orders.

The group’s overall message supports the “San Diego County Board of Supervisors taking back control of our path forward.”

KUSI’s Dan Plante attended the rally where he spoke with attendees and elected officials who are fighting for local businesses against the State of California.

During the KUSI News at 5:00, Plante spoke with Weber about how her frustration turned into the rally bringing San Diegans together.

Plus, Weber had a color-coded map enlarged onto a poster that showed which tier all 50 states would be in if they had to follow Governor Newsom’s stringent reopening guidelines.

The map was very critical of Newsom’s guidelines reading, “California is not leading, it’s lagging.”

Plante also spoke with San Diego City Councilman Scott Sherman (Video Below) who challenged Supervisor Nathan Fletcher to donate his salary to the effort of fighting COVID, so he can feel the pain so many San Diegans are experiencing as he continues to support keeping businesses closed.

“Nathan Fletcher has never run a business, he’s still collecting his $200,000 per year paycheck, he hasn’t had to fire everybody, so all those decisions he is making, don’t affect him personally,” said Sherman. 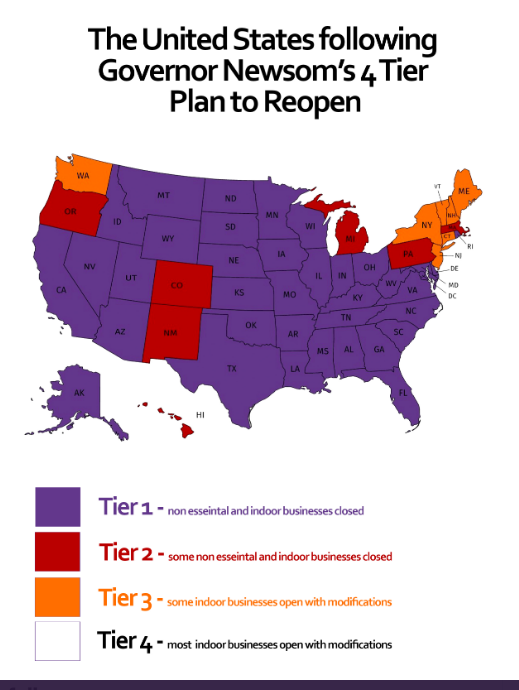 Map featured on a poster at the “We Mean Business” rally

Fletcher then said any expedited reopening will only make the current situation worse, and result in much higher death rates.

KUSI News will be live at the County Administration Building covering a rally to get local control of the coronavirus response. The rally was organized by local business owners who are against state control.