OCEANSIDE (KUSI) – A tractor being used at a dredging project at Oceanside Harbor Beach Monday ran over a woman lying on the sand and killed her, authorities said.

The fatal accident occurred shortly after 10 a.m. at the waterfront off the 1200 block of North Pacific Street, Oceanside Police Departm 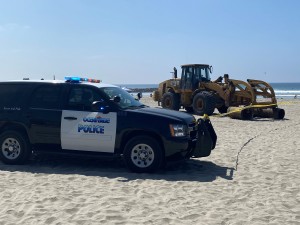 The unidentified victim died at the scene. It was not immediately clear if the woman, who was fully clothed, was in an unauthorized construction zone at the time of the accident.

Police cordoned off the beach in the immediate area due to the fatality, which was witnessed by a city lifeguard, Bussey said.