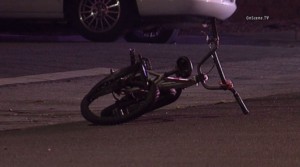 VISTA (KUSI) – A woman who allegedly struck and killed a bicyclist in Oceanside, then fled the scene, pleaded not guilty Tuesday to a felony count of hit-and-run causing death.

Bailey Tennery, 24, is accused in the death of 27-year-old Carlsbad resident Jackson Williams, who was struck July 15 while riding on Oceanside Boulevard near Interstate 5.

Williams, who sustained major head trauma, died at the scene, according to Paul.

Tennery was arrested on Friday at her Oceanside home. Officers also seized her 2014 black Nissan Versa Note, according to Paul.

Tennery remains held on $150,000 bail and is due back in court Aug. 10 for a readiness conference.