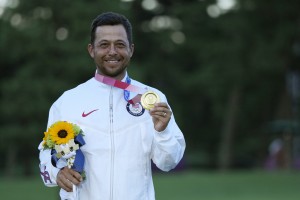 Xander Schauffele, of the United States, holds his gold medal in the men’s golf at the 2020 Summer Olympics on Sunday, Aug. 1, 2021, in Kawagoe, Japan. (AP Photo/Andy Wong)

Schauffele began the round at Kasumigaseki Country Club in Saitama City, Japan with a one-stroke lead over 2021 Masters champion Hideki Matsuyama. The San Diego State and Scripps Ranch High School graduate birdied each of the first two holes to increase his lead to three strokes. Birdies on the fifth and eighth holes gave him a four-stroke lead.

With Schauffele parring the ninth through 13th holes, his lead shrunk to one shot over Sabbatini, who had completed his round at 10-under-par 61, an Olympic record, to drop to 17-under for the tournament.

On the par-5 14th, Schauffele said he “made an absolute mess of the hole.” He badly pushed his drive that ended up in dense underbrush and forced a penalty drop. What followed was what Schauffele called “my lucky moment of the day.”

“When you’re trying to win a golf tournament you need things to go your way,” Schauffele said. “To me that was a very stupid thing I did potentially. I tried to hit it through a gap. I missed the gap completely and my ball literally shot through like three different trees to get out to advance.

“No guts, no glory I guess is what they say, but that could have easily hit the tree and gone straight out of bounds again and I probably wouldn’t even be on this podium.”

Schauffele made a 5-foot, 1-inch putt for a bogey that left him tied with Sabbatini and one stroke ahead of Matsuyama.

Following pars on the 15th and 16th holes, Schauffele birdied the 17th hole to regain a one-stroke lead over Sabbatini. Schauffele had another pushed drive on the 18th hole, forcing him to lay up into the fairway, leaving a wedge to the hole.

Schauffele wedged to 4 feet, 6 inches, then holed the par putt to complete his round at 4-under 67 finish the tournament at 18-under 266.

“It was a roller coaster day for me especially on that back nine coming in and just happy I could fall back on parts of my game to sort of pull me through,” Schauffele said after his first victory since the 2019 Sentry Tournament of Champions. He has had eight second-place finishes on the PGA Tour since then including three this season and in the 2019 Masters.

Schauffele said he thought about his father Stefan “as soon as I made the putt” then hugged him.

“I knew he was going to be there crying, luckily he had shades on, but it was really cool,” Schauffele said. “This whole experience has been really, really special and to have him here is even better.”

The elder Schauffele grew up in Germany as an Olympic decathlon hopeful before a car crash with a drunken driver caused loss of vision in his left eye, ending his Olympic dream at age 20.

Stefan Schauffele has been the only swing coach his son has had. The two worked together on the driving range following the third round.

Schauffele’s mother Ping Yi was born in Taiwan and grew up in Japan from age 4. His maternal grandparents live in Tokyo.

“My ties here with my grandparents living here and my mom growing up here as well, there’s just all these things that sort of motivated me to do better,” Schauffele said. “And maybe I put more pressure on myself but it was sort of more than just golf for me.”

Sabbatini, who was born in South Africa but was representing his wife’s homeland, Slovakia, of which he is a citizen, won the silver medal. He entered the final round among 11 golfers tied for 17th, seven strokes off the lead.

Matsuyama was among seven golfers who completed regulation play tied for third at 15-under 269 for the tournament after shooting a 2-under-par 69 for the final round. C.T. Pan of Taiwan won the eventual four-hole playoff for the bronze medal.

Schauffele is fifth in the Official World Golf Ranking. Top-ranked Jon Rahm of Spain was forced to withdraw from the Olympics after contracting the coronavirus while second-ranked Dustin Johnson of the United States declined to play.

American Collin Morikawa, who is ranked third, bogeyed the final hole of the playoff to lose to Pan. Fellow American Justin Thomas, who is ranked fourth, was among five golfers tying for 22nd, eight strokes off the lead. 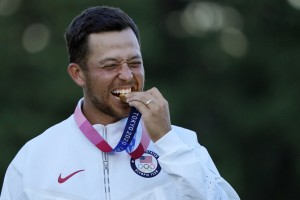 Xander Schauffele, of the United States, walks bites his gold medal in the men’s golf at the 2020 Summer Olympics on Sunday, Aug. 1, 2021, in Kawagoe, Japan. (AP Photo/Andy Wong)