The effort announced Monday by Carl DeMaio would ensure that the gas tax remains a political fight long after the voters decide Proposition 6 next week. Repealing the higher gas taxes and vehicle registration fees passed last year by state lawmakers has been a central message for Republicans, who have struggled in a state that’s trending increasingly Democratic.

Becerra says the courts have sided with him.

The Yes on 6 Campaign sent out the following press release announcing their successful recall of State Senator Josh Newman from office, and their attempt to use recall to punish AG for misleading ballot deception on Gas Tax Repeal if Prop 6 fails:

“If you steal our gas tax funds and then steal our votes by lying to us on our election ballots when we seek to repeal the tax, we will RECALL you from office!”

That’s the threat issued today by the Yes on Prop 6 Gas Tax Repeal campaign as it announced it has filed a committee with the Secretary of State’s office to Recall California State Attorney General Xavier Becerra from office over his decision to slap an intentionally deceptive title on Prop 6 – the Gas Tax Repeal Initiative.

“Voters who wanted to vote YES on Prop 6 have been deceived into voting NO – all because the Attorney General bowed to special interest pressure to remove the words ‘Gas Tax Repeal Initiative’ from the ballot and replace them with an intentionally false and deceptive title,” said Carl DeMaio, Chairman of Yes on Prop 6.

“We are working hard to warn voters that there is an error on their ballot because state politicians intentionally mislabeled Prop 6 in an attempt to deceive them – and that a YES Vote on Prop 6 is actually for the Gas Tax Repeal Initiative,” DeMaio said.

“We still believe we will win Prop 6, but if we fall short because voters were defrauded of their intent to vote Yes on Prop 6 the Gas Tax Repeal Initiative, we fully intend to Recall Xavier Becerra from office as a punishment and to set an example to state politicians that they cannot lie on our ballots to trick voters into voting NO on something they intended to vote YES on,” DeMaio promised.

DeMaio presented polling evidence showing the damage done to Prop 6 because the words “Gas Tax Repeal Initiative” were intentionally struck from the title of Prop 6.  In a recent Survey USA poll, 58 percent of California voters said they would vote YES to repeal the gas tax and only 29 percent would vote No.  However, when the misleading ballot title for Prop 6 is read to voters, the numbers substantially change – while a Thomas Partners Strategies poll taken during the same three day period as Survey USA showed Prop 6 tied – 35 percent NO to 35 percent YES.

Over 1 million Californians signed a petition with the title “Gas Tax Repeal Initiative” on it to get Prop 6 placed on the ballot.  After the No on Prop 6 campaign did extensive polling and focus groups to determine what words to use to defeat the Gas Tax Repeal Initiative, the Attorney General struck that title and replaced it with “Prop 6: Eliminates Certain Road Repair and Transportation Funding.”  Not a single word of Prop 6 eliminates road repair funding, and a recent Legislative Analyst Office study proved you could actually increase road repair funding by dedicating 100 percent of the original gas tax rate to roads.

The Recall threat is credible because the Yes on Prop 6 campaign already successfully led the Recall of State Senator Josh Newman from office earlier this year – winning a lopsided 59% removal vote in a Democrat-leaning district despite being outspent 8-to-1.   Unlike ballot propositions, state politicians cannot change the ballot title on a Recall Election as the ballot will simply read “Should Xavier Becerra be recalled from the office of Attorney General?”  A simple YES or NO is then asked of the voter – and a special Recall Election will likely have a turnout of high information voters.

“Sacramento politicians think they are being clever by deceiving voters with a misleading ballot title on Prop 6, but have they thought about what will happen when millions of Californians wake up the next day and realize they were tricked into voting NO on something they wanted to vote YES on?” DeMaio asked.  “Sacramento politicians better pray that Prop 6 passes because if it doesn’t this issue will not go away and more of them will lose their offices in the next year,” DeMaio predicted.

The campaign committee filed today is the first legal step in the Recall of a state official – and carries the title “Recall Xavier Becerra for Defrauding Voters on Prop 6 the Gas Tax Repeal Initiative.”  Voters who believe they were defrauded of their YES vote on Prop 6 because of the false title on the ballot are asked to contact the Committee at www.RecalltheAG.org 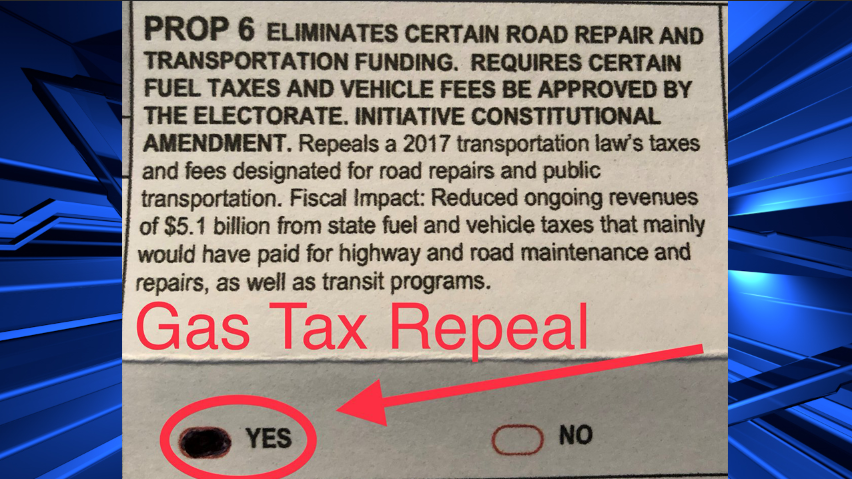